Acumen Wealth approached the first quarter of 2019 with caution.  Having lowered equity exposure early in October, our position is to listen closely to the Federal Reserve when making investment decisions.  In the first quarter, the Fed abruptly changed its plans in response to the stock market decline and, possibly, political pressure.  The Fed ceased all talk of balance sheet tightening and interest rate hikes.  Instead, they began suggesting rate cuts and being open to the possibility of further balance sheet expansion.  Such a sudden shift was difficult for anyone to anticipate.  As a result, the S&P 500* climbed 13% higher in the first quarter of this year, rebounding from a very oversold 14% slump in fourth quarter 2018, and down over 9% in December alone.  Although the slump may be the worst December in the history of Decembers, and, most certainly, the worst decline in the last 50 years.  The recovery was equally as fierce.

The Fed wasn’t fully responsible for the rally since they weren’t the only ones easing policy.  On a global scale, the People’s Bank of China (PBoC), which is China’s equivalent to our Federal Reserve, did more than hint at easing.  They did so unabashedly.  The difference is China’s economy and stock market began to slow before ours and to a much more significant degree.  The Shanghai Stock Exchange Composite (ticker SSEC, a capitalization weighted index similar to our S&P 500) was down about 25% throughout 2018 (www.bloomberg.com/quote/SHCOMP:IND) and without any of the upside we realized from March to September.  Consequently, the combination of domestic central bank easing, cessation of rate hike discussions, and even potential rate cuts, led to a nice rally in the fixed income markets as rates fell.

Another highly cited rationale for the first quarter 2019 rally was progress on trade talks between the US and China.  Early on, every headline reporting progress was made, would be accompanied with an immediate bump higher in stocks.  And, there were lots of headlines.  This type of market cheerleading, without any actual results, loses its effect over time.  If we don’t see some actual progress in talks soon, we run the risk of giving up some of the gains caused by the excitement of the perpetual headlines.  Our team remains cautious but invested internationally as we do anticipate progress in the trade negotiations.

Where does this situation leave us?  We are “cautiously optimistic,” and, yes, we realize how ambiguous, yet fitting, this terminology is for investors.  The economy is slowing, but the Fed is aware and, at least, pushing in the right direction now.  It doesn’t pay to fight the Fed. Currently, the Atlanta Fed estimates first quarter Gross Domestic Product (GDP)** at 2.1% versus their estimate of 0.4% when March began.  If GDP isn’t slowing as fast as we thought, it’s the second derivative or the acceleration that’s important rather than the velocity.  For example, the change from 2017 GDP growth of 2.2% to 2.9% in 2018 is comparable to what you would feel in your car going from 50mph to 55mph.  Markets made new all-time highs, but not significantly.  But, at the end of the year, when indications came out, the GDP was slowing, even though it was still expected to be positive, the market screeched lower.  Not unlike the car analogy of moving from 55mph to 10mph – still going forward, but it feels like you’ve reversed compared to where you were. 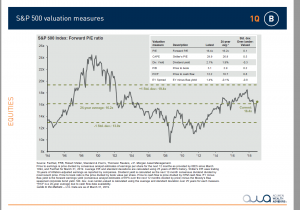 A supportive Fed and an awareness of a slowing economy, here and abroad, leaves us believing we are less likely to experience a significant stock market downturn as was previously expected.  While we do believe the stock market outlook is improving, we are not ready to normalize our tactical tilt yet.  After the fantastic recovery in the first quarter, stocks are back to looking overvalued on both a technical and valuation standpoint.  As depicted in the chart above, the market is often determined to be overvalued, undervalued, or fairly valued based on its current P/E ratio relative to its historical average.  The P/E ratio is calculated by dividing the price by its earnings.  Given concerns fourth quarter earnings estimates for the S&P 500 may be too high, we will be monitoring this valuation measurement closely.  If you are interested in more technical information on P/E and EPS, please click here.

Acumen maintains our bias toward high quality and safety.  In late 2018, we moved tactical allocations away from stocks and heavier into fixed income.  As 2019 progresses, we may undo this tactical move if:

As always, our outlook will adjust as new data emerges.

*S&P 500 Index is widely regarded as the best single gauge in the U.S.  equities market.  The index includes a representative sample of 500 leading companies in leading industries of the U.S.  economy.  The S&P Index focuses on the large-cap segment of the market; however, since it includes a significant portion of the total value of the market, it also represents the market.  All indexes are unmanaged and an individual cannot invest directly in an index.  Index returns do not include fees or expenses.  S&P 500 data numbers were pulled from J.P.Morgan Guide to the Markets 2Q 2019 as of March 31, 2019.  **Gross Domestic Product (GDP) numbers were obtained from https://www.bea.gov/system/files/2019-03/gdp4q18_3rd_1.pdf , Bureau of Economic Analysis website.  Any charts, graphs, and descriptions of investment and market history and performance contained herein are not a representation that such history or performance will continue in the future or that any investment scenario or performance will even be similar to such chart, graph, or description.

Acumen Wealth Advisors, LLC® is a Registered Investment Adviser.  Advisory services are only offered to clients or prospective clients where Acumen Wealth Advisors, LLC® and its representatives are properly licensed or exempt from licensure.  Past performance is no guarantee of future returns.  Investing involves risk and possible loss of principal capital.  No advice may be rendered by Acumen Wealth Advisors, LLC® unless a client service agreement is in place.  Comments concerning the past performance are not intended to be forward looking and should not be viewed as an indication of future results.  Diversification does not protect against loss of principal.  The opinions expressed in this commentary should not be considered as fact.  Information contained herein is not and should not be construed as an offer, solicitation, or recommendation to buy or sell securities.  The information has been obtained from sources we believe to be reliable; however, no guarantee is made or implied with respect to its accuracy, timeliness, or completeness.  It is suggested that you consult your financial professional, attorney, or tax advisor with regard to your individual situation.